Recently, WordPress rolled out a major update in the way of 3.9 titled “Smith” after Jazz musician Jimmy Smith.  There are many cool new features that WordPress users will enjoy and in this article, I will share with you my top 5 new additions to the WordPress core.

Most sites these days support the ability to bypass the annoying windows explorer step where you have to browse your computer for an image to use in a post or upload.  In this new version of WordPress, you can now simply drag and drop an image right into a post and edit on the fly.  Check out the video below to see this neat addition in action as well as some of the other minor updates to the visual editor.

New to WordPress 3.9 is the ability to add audio and video playlists right into your post…hooray!

Up to this point, musicians and video producers had no way of embedding playlists into their sites without the use of third party plugins.  Now, with this latest release of WordPress 3.9, you can easily add an audio or video playlist right from within the visual editor using a shortcode similar to image galleries.  A neat feature that works in the background is now the ability for WordPress to search for the album cover image based on the ID3 tag specified in your media file. 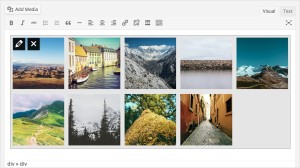 Wouldn’t it be nice to actually be able to see your image gallery right in the visual editor? Done.

A simple but meaningful change is the ability to now see your image gallery right in the visual editor rather that the usual gray box placeholder.  This would be a nice upgrade for video as well in the upcoming releases of Smith.

The old way of working with widgets was great unless you had a lot of widgets and then it was a pain to have to drag and scroll up the page to get things into the box.  This new way of working with widgets is pretty cool and allows you to also see exactly what your changes look like right in the preview pane in real time.  Also included in this new feature is the ability to reorder, update, add, remove and reorder your widgets and of course seeing those changes before saving and seeing them live on the site.  Check out the video below to see this feature in action.

Finding new themes is even easier now with a great tabbed theme browser that allows you to quickly see the most popular, featured, latest, and searchable themes.  When previewing a new theme you can also now go beyond the slight customization that was once offered like changing the color, title and other minor attributes.  Now you can even add widgets and rearrange them to see exactly how they will render within the new theme.  The header image upload also got some new functionality as well which makes it even easier to customize and preview your theme’s image header.